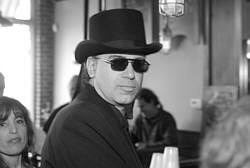 The Hitman Blues Band along with the New York Horns performed for us on October 23rd just before their gig at the Stables in Wavenden.

Hitman performed “Side Pocket for a Toad” a song inspired by Tring Brewery’s beer of the same name.

Russell ‘Hitman’ Alexander is a real deal New Yorker and has a striking charismatic personality and knows how to entertain, putting on a show with superb blues. He’s an excellent song writer and has released several albums to acclaim. He has music in his blood – his father, vibe player Ray Alexander, was prominent on the New York jazz scene. In the USA the Hitman Blues Band has been nominated for the blues grammies.

Listen and watch their video “Streets of Downtown” by clciking the play button below.