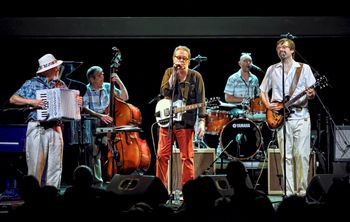 Formed back in 2000 by ex-members of the bands of Otis Grand, Paul Lamb, Big Joe Louis and Camden legends The Poorboys, The Cadillac Kings have since built a huge reputation for entertaining audiences with a unique mix of self-penned rhythm & blues, swing (and humour!) In that time they have played at over a thousand different clubs, concert halls, theatres and festivals across the UK and Europe, from the Canaries to the Arctic circle.

In 2003 they were signed by Paul Jolly for his 33 Records label and since then have released 5 award-winning cds, including in 2004 The Times’ best blues cd of the year for their album ‘Highway 17’, and in 2009 Canada’s ‘Real Blues’ Magazine’s award for the best UK blues act’s cd for ‘Trouble in Store’. Their 2012 release “Gonna Tell Your Momma” was recorded 100% live in Norway and had rave reviews in every magazine from ‘Blues in Britain’ to ‘Folk Roots’, from ‘Blues Blast USA’ to ‘Blues News Norway’!

Their most recent cd “The Secret of My Success” reached the number one position in the USA’s Cashbox Blues & Boogie chart in 2017, and stayed there for four weeks, holding off acts such as The Fabulous Thunderbirds, Rick Estrin & The Nightcats, Coco Montoya, John Primer and Samantha Fish. The UK Independent DJs association voted ‘The Secret of My Success’ as one of the top 3 releases of that year alongside Kaz Hawkins & Joe Bonamassa

The bandʼs popularity on Youtube has resulted in their videos currently scoring hits in the millions, with their song “Betty Lou” reaching over 3 million hits and two more band originals “Left Handed Woman” and “Cadillac Shake” together, approaching the million mark.

2022 marks the bandʼs 22nd year on the road, and signals their strongest ever line-up, featuring two of the UK’s very best roots players – sensational pianist & accordionist – Tim Penn, and on guitar the brilliantly versatile Mal Barclay, alongside singer/songwriter, slide guitarist, & harp player, Mike Thomas, backed up by the terrific rhythm section of Paul Cuff on double bass and Jason Reay on drums.

“Their latest album confirms my opinion that the Cadillac Kings are the top rhythm and blues band on the UK scene”
John Mitchell, Blues Blast Magazine, USA

“Good time blues at its very best, do not miss these guys!”
Lionel Ross, Blues in Britain Magazine.

“One of the nation’s finest bands in ANY genre. Guaranteed to put a smile on your face.”
Grahame Rhodes, The Liverpool Echo.

“A sensational band that swept the 1500 strong crowd to their feet. A night to remember!”
Mark Acheson, The Portsmouth News.